Conversation with a Stranger

I was part of the project “Workshops in People’s Homes” in May 2016 which was a project developed by the arts organisation Abandon Normal Devices and Artist Joshua Sofaer.

The program invited people to develop their own unique workshops to deliver to the public from their own homes. I chose to host mine at Winters Park Residential Home, the home of the residents.

The workshop invited members of the public to come to the home and spend 2 hours with one of the residents to share a conversation over tea and cake. In the 2 hours they were given the opportunity to hold hands in order to make a unique plaster cast of their embrace.
I designed and ran the workshop which created an opportunity for the residents to meet someone new and also involve the creation of a piece of artwork to raise awareness of the importance of conversations.

You never know were a conversation with a stranger will take you, it is a journey you take not knowing where it may lead, the effect it may have on you or those you are sharing the journey with. A conversation doesn’t have to be long, deep or emotional to be important and make a difference to someone’s day or even life. It is a journey that could just start with a smile and end up with a lifelong friendship.
The hand casts aim to present a physical reminder of the effects a conversation can have, the thoughts inspired remain solid and that even though the meeting has ended the impression of the contact can still be felt.

Both the public and the residents who came found it a relaxing and enjoyable experience. Anyone who had a negative opinion of care homes came away feeling much more positive about them.

Amanda Drummond, Workshop Volunteer said: “It was great listening to people swopping stories and experiences and finding out things about residents I had not previously known. The one thing the residents have at their disposal is time. Time to talk and tell and remember who they were! What could be more rewarding for them and all who were involved in the project. Katarina gave the residents of Winters Park an opportunity to do this.”

Julie Prior, participant, said: “I was concerned about what I could talk about with an elderly stranger. Straight away I found we had many things in common, a love of Allonby on the west coast, for instance, where we both have many happy memories of the old riding stables and the fantastic ice cream at Twentymans. Katarina had supplied ideas for topics of conversation and we even found out that our favourite film star was Richard Burton! The conversation covered observations from someone able to reflect on past experience to views on current topical issues. I would encourage everyone to pop in to see someone they think might be lonely as I’m sure they will find it far more rewarding and enjoyable than expected”.

Christine Dennis a resident at Winters Park said: “I was involved in the workshop at our home and I really enjoyed it. When the day came for the workshop with the public I knew what was going to happen and looked forward to meeting someone new. I told my new friend all about my experiences during the war when I was evacuated. She was fascinated to hear all about it and told me a lot about herself too“.

The plaster cast hands created during the workshops were exhibited alongside work by 11 other artists in The Old Fire Station on Bridge Lane in Penrith as part of the Cumbrian open studio event, C-Art which is organised by Eden Arts. 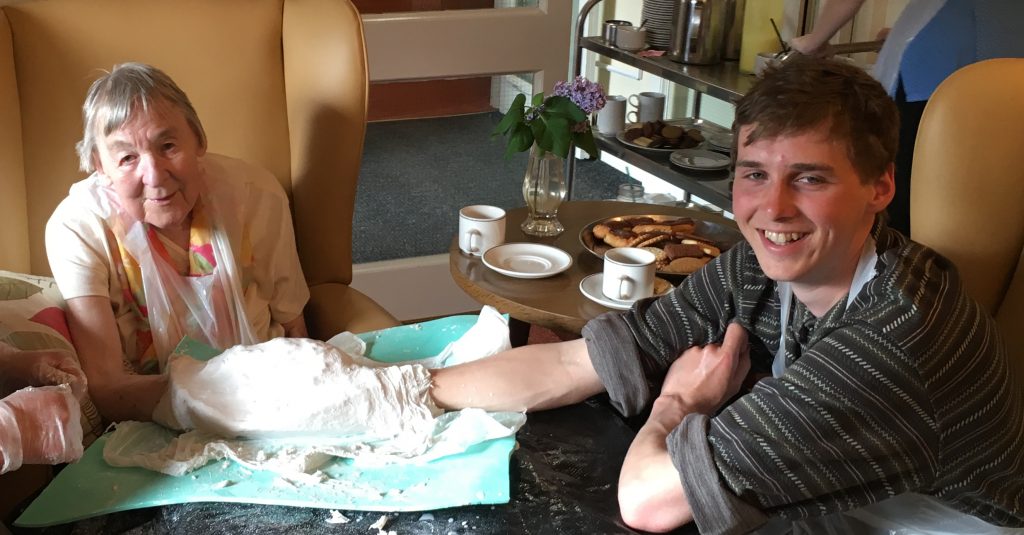